The darkness of night spread across Ponyville. It was the one night of the year on which ponies would don disguises and gather to present their offerings of assorted confections to the wicked mare of darkness, lest she descend from the sky to devour them. What fun everypony was having this Nightmare Night! From a haunted corn maze and apple bobbing to pranking one another and going door-to-door to beg for candy, Nightmare Night was hardly the eve of fright it once was. It was a night to have fun being scared.

The townsponies were waiting in anticipation for Princess Luna’s arrival. They could already imagine cowering in consternation, trembling in trepidation, and the hammering of their hearts as they hastened to hide as she swooped from the sky. As they were enjoying the evening’s merriment, a figure soared across the purple sky.

Everypony gazed upward as the Princess of the Night descended upon them.

“Your Princess has arrived!” Luna announced as she alighted before them. “Now give to us thy candy or be gourmandized by-” there was a flash of lightning; when it cleared, there stood her alter ego “-Nightmare Moon!”

The ponies shuddered and covered their eyes, screaming out in fear before praising the Princess. In another flash of lightning, Nightmare Moon transformed back into Princess Luna. “Happy Nightmare Night, everypony!” she bid her subjects.

The Princess had only so much time to enjoy the spooky festivities before setting out to spend the holiday with the rest of Equestria. The Mane Six and Spike were among the ponies who greeted Princess Luna. Once she arrived, they started to accompany her on their frightful delights. Fluttershy, however, had a different evening planned. Never one to see her friends affright, even in good fun, she’d prefer to spend Nightmare Night fright-free at her cottage. Tonight, she would be celebrating Nightmare Night with Tree Hugger.

At her cottage, Fluttershy and Tree Hugger were having a delightful conversation, bringing each other up to date on their daily activities, discussing the wellbeing of the animals, and Tree Hugger’s work at the Equestrian Society for the Preservation of Rare Creatures.

“The Society has established a nature preserve in Saddle Arabia,” said Tree Hugger. “Now, the rare Cinnamon Bird can have, like, a place to totally take it easy.”

“Aahh!” the playful screams of everypony outside could be heard.

“Listen to them,” Fluttershy started. “They sure sound like they’re having fun. They did invite me to join them, but I politely passed. I don’t like seeing my friends scared more than I don’t like being scared myself.”

“There is nothing wrong with that, Fluttershy,” said Tree Hugger. “Some ponies find being scared, like, totally radical, and that’s what gives them a groovy vibe. When it’s all in good fun, negatives are positives.”

Suddenly, more screams were heard, only these didn’t sound like playful screams. True terror was heard in them. These were real screams of horror!

Fluttershy began to tremble. “Oh my. That can’t be good.”

The sounds of shrieks and screams drew nearer with every passing second. Voices and the marching of hooves sounded clearer. They were right outside the cottage, coming closer… closer… until…

“We need your help!” cried another.

Fluttershy carefully opened the door. A crowd had gathered outside, almost in angry mob fashion.

“It’s some kind of ghost dog,” said Davenport. “It tried to take my candy!”

“There’s no such things as ghosts,” Roma asserted.

“Well whatever it is, it’s scared our little foals,” said Mr. Cake. He and Mrs. Cake held Pound Cake and Pumpkin Cake close to them.

“Fluttershy, dear,” began Mrs. Cake, “nopony knows animals like you. Could you find out what has the animals, and us, for that matter, in such a tizzy?”

Her fear of the unknown made Fluttershy a little hesitant at first, but seeing how everypony and the animals needed her help, she knew she had the strength and bravery to stare this situation straight in its eyes.

“Everypony,” Fluttershy announced, “I will go to the Sweet Feather Sanctuary and get to the bottom of this.”

The ponies all cheered for their heroine.

Fluttershy turned to Tree Hugger, “I know this may be a lot to ask of you, but could you perhaps come with me?”

“I’m totally with you, Fluttershy,” Tree Hugger assured. “I’m sensing a lot of tension and anxiety. I’m, like, feeling so bummed out right now. We need to bring everypony back to their happy places.”

At the Sweet Feather Sanctuary, the animals hurried to Fluttershy’s side, finding comfort with her.

“You poor things,” Fluttershy began. “Tree Hugger and I won’t let anything harm you.”

“Can you tell us what you saw?” Tree Hugger asked.

The critters chirped and chattered in reply. Fluttershy and Tree Hugger understood them perfectly. The sanctuary was haunted! Though she knew that ghosts weren’t real – or at least she hoped they weren’t – Fluttershy knew that something had her animal friends spooked and she had to get to the bottom of it.

The night was eerily silent. As they walked further into the sanctuary, the only sound Tree Hugger and Fluttershy could hear was that of the waterfall, and even that didn’t sound as lively. The night air was still and nary a wisp of wind whistled. With every step she took, Fluttershy could feel her heart pound faster and harder inside her chest, but it was her commitment to the animals’ wellbeing that kept her going.

There came a rustling in the bushes and the snapping of a twig.

Nothing. The mares continued on.

“Fluttershy… was that you?” Tree Hugger asked nervously.

“No,” Fluttershy answered. “I thought it was you.”

The mysterious giggling sent shivers down their spines.

She and Fluttershy stood close together as they saw two glowing yellow eyes emerge from the darkness.

The weird chortle made the mares’ blood run cold.

Slowly and steadily, the creeper crept closer. Then it pounced, lunging for Fluttershy and Tree Hugger!

They turned to flee, but the monster followed with a snicker. Every which way they turned, the ghostly laughter followed. They ran among the trees. They were in the clear. This was their chance to escape. A dead end. There was nowhere for them to go, except back, back where the monster was lurking. Fluttershy and Tree Hugger held each other tightly.

Knowing that she was about to come face-to-face with the unknown, Fluttershy swallowed hard. She took a deep breath and, holding her head high, stepped forward. “I am not afraid,” she declared. “I am not going to let you scare my friends any more. Now come out and show yourself.”

The beast stepped out from the shadows into the moonlight. It had brown fur, a long bushy tail, pointed ears, and a mouth full of sharp teeth. It looked very much like a dog. Surely this was no ghost.

Tree Hugger gasped. “He’s a shunka warakin. I’ve read about them at the Society. They are rare. Their playful calls are not unlike a little foal’s laughter.”

The shunka warakin meant no harm. His ears folded back as he whimpered, feeling misunderstood.

“Why, you’re not a monster at all,” said Fluttershy. “You didn’t mean to scare everypony, did you?”

“You were just looking for somepony to play with, weren’t you?”

Fluttershy and Tree Hugger played with their new animal friend.

Fluttershy called her friends, pony and critter alike, together and told them that the “ghost” was just a playful animal called a shunka warakin.

“You see? He’s not a ghost, or a monster,” said Fluttershy. “He’s just a lost little fella looking for friends.”

Everypony could now breathe a sigh of relief. Their imaginations had run wild and got the best of them.

The next morning, Fluttershy, Tree Hugger, the shunka waraking, and Dr. Fauna met up at the Sweet Feather Sanctuary.

“Well, I gave him a checkup, and he’s healthy as can be,” informed Dr. Fauna.

They watched as he ran to play with his new friends. 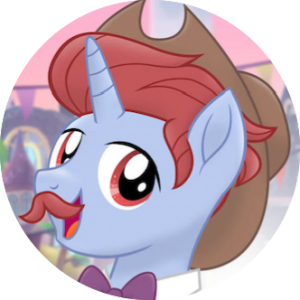 Cosmic Cowpony is a unicorn. A lover of Discord, CC, came to the brony fandom after seeing Discord sing “Glass of Water.” After watching a clip on YouTube, Cosmic Cowpony began watching MLP:FIM on Netflix where he has continued to watch the show all of these years later. His greatest passion in life is making movies with his friends. Being a lover of film-making his cutie mark is a reel of film with stars to signify movie magic. MLP: FIM has been a huge influence on how CC has approached movie-making and has also served as an influence and inspiration in his other work hobbies, and of course, his life. May Harmony abound!

MLP FAN FICTION: SCENES: Daring Do and the Sands of Time

MLP FAN FICTION: SCENES: The Legend of the Flying Pegasus