The season of autumn has arrived in Equestria. The leaves have begun to turn orange and the breeze blows cooler and crisp. Ponies are taking out their warm coats and scarves. In Dodge Junction, Cherry Jubilee could not be happier. This was always her favorite time of year. It marked the beginning of the holidays, a time when ponies come together from near and far to celebrate the joys of Harmony, of family and friends, and of life.

One fine morning at the Cherry Hill Ranch, Cherry Jubilee was up early doing chores. She fetched water, swept the front porch, and bucked the cherries from the trees, collecting them in buckets. She loaded them up onto a cart and hauled it into town.

The ponies in Dodge Junction were busy making preparations for their annual Harvest Festival. During the Harvest Festival, everypony in town comes together to share the bounty of their harvest, giving thanks for all they have. Cherry Jubilee was in charge of organizing the big celebration. She took her cart to town hall where a group of ponies were moving tables out to the main street.

“Let me take that cart for you.” The stallion helped her unload her cherry crates. “Say, by any chance, y’all wouldn’t happen to be bakin’ yer famous cherry pies, now would you?”

A few ponies were laying out table cloths.

“Pardon me, Miss Cherry Jubilee,” began another stallion approaching her. “Should we use the orange napkins or the yellow?”

Cherry Jubilee didn’t have to think twice about it. “Use both of them,” she answered. “They’re both great fall colors.”

“Consarn it! Why didn’t Ah think o’ that? Thankee kindly.”

“Sure think, dear.” Having dropped off her cart, she must now go around town to continue overseeing preparations. “Y’all are doin’ a marvelous job. Now if y’all don’t mind, Ah’ve got tuh go around an’ make sure everypony else is on schedule.”

As she was making her rounds, she was paid a visit by Doc Spitzenburg, the town doctor.

“Ah sure am, Doc,” replied Cherry Jubilee. “Ah’ve got a feelin’ that this year’s Harvest Festival is gonna be the best that Dodge Junction’s ever seen!”

“With you runnin’ things, Ah wouldn’t be surprised. If ya need me, Ah’ll be in my office.”

Doc Spitzenburg tipped his hat and continued on his way.

“Bye now!” Cherry Jubilee waved. She checked her to-do list. “Let’s see,” she said to herself, “Pokeweed and Huckleberry are gatherin’ fruits an’ vegetables. Ah’ll see how they’re doin’.”

Over in the farmland just outside town, Pokeweed, a mare, and Huckleberry, a stallion, were finishing harvesting their crops.

“Ah jus’ came by to see how y’all are doin’,” said Cherry Jubilee. “Everypony’s bringin’ sumthin’ to the big dinner, an’ I know y’all are bringin’ the bulk of the fruits an’ vegetables.”

“We know how important the Harvest Festival is for you,” added Pokeweed. “We sure ain’t gonna disappoint you.”

“Oh, Ah sure do appreciate that,” Cherry Jubilee said with a smile. “Ah best finish up my rounds. Keep up the good work!”

Following her check list, she went over to the saloon. Inside, lively piano music filled the air. Cherry Jubilee walked up to the bar. The barkeep was pouring a pony a pint of pop.

The barkeep turned around. “Miss Jubilee! Just the mare I wanted to see. Might I fix you up a glass of sarsaparilla?”

“No thank you, dear. Ah’m here to take inventory. Ah’ve got ya penciled down for three barrels of apple cider, three of cool water, two of lemonade, and two of root beer.”

“I got them barrels right here!” said Mr. Spritzer.

“Splendid! Ah’ll get these over to town hall right away.”

Mr. Spritzer adjusted his bowtie and fixed his sleeve garters. He stepped around from the bar to deliver the barrels. As he did so, Cherry Jubilee went over to the big barn house. Streamers and balloons were put up all around. Inside, a stage was set up. A cowpony band was tuning up their instruments and rehearsing their songs. Cherry Jubilee stood by the stage and watched them play. She tapped her hoof to their Western swing rhythm. When they finished their number, she gave them applause.

Troubadour was the town balladeer. He knew every cowpony ballad and folk tune. It’s no wonder Cherry Jubilee put him in charge of the music and the barn dance.

“I’m sure happy ya like our music, Miss Jubilee,” said a young stallion named Saddle Song.

“Ah could listen to you fellas all the live long day. Ah reckon we’ll all have ourselves a hoof-scootin’ good time tonight.”

“Right so,” Troubadour replied. “It jus’ wouldn’t be a Harvest Festival Hoedown if we didn’t.”

With the music and the barn dance taken care of, Cherry Jubilee could check it off her to-do list.

It took all day, but preparations were finally complete. The tables were all set and everypony gathered around. There was so much food: fruits and vegetables; corn bread and taters; pitchers and barrels of refreshing beverages; and for dessert, custard, pudding, pies, and cakes.

Cherry Jubilee stood before the founders of the feast, the citizens of Dodge Junction. “Excuse me, everypony. Ah am so very glad for all of us to be gathered together. Look around, y’all. Let us be thankful for all our friends and family, and for a successful harvest and this wonderful banquet. This is the product of a year’s hard work. Let us all be blessed with another fruitful year and may Harmony abound!”

Everypony raised their glasses and toasted in agreement. They all had a wonderful time, laughing and enjoying each other’s company. After they ate a hearty feast, they danced the night away at the big hoedown. Cherry Jubilee and Troubadour two-stepped across the dancefloor as Saddle Song strummed away at his guitar. The ponies of Dodge Junction had no worries or cares. This was not a time for such troubles. This was a time for friends and strangers to come together to celebrate and share all they have and all they’ve been given. Nopony could ask for more. Cherry Jubilee saw the bright smiles and joy on everyponies’ faces and knew that this really was the best Harvest Festival that Dodge Junction had ever seen. And as it’s said in that harvest hymn:

For everypony: every stallion, mare, and foal / The harvest of the heart is the greatest gift to bestow.

Cosmic Cowpony is a unicorn. A lover of Discord, CC, came to the brony fandom after seeing Discord sing “Glass of Water.” After watching a clip on YouTube, Cosmic Cowpony began watching MLP:FIM on Netflix where he has continued to watch the show all of these years later. His greatest passion in life is making movies with his friends. Being a lover of film-making his cutie mark is a reel of film with stars to signify movie magic. MLP: FIM has been a huge influence on how CC has approached movie-making and has also served as an influence and inspiration in his other work hobbies, and of course, his life. May Harmony abound! 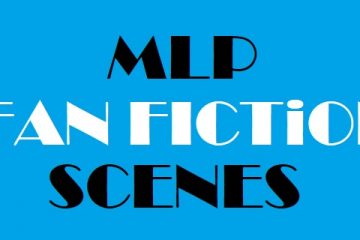